When we first moved to Wivenhoe, Essex, over six years ago now, my compass still pointed towards London. The railway was a thin chain, a line of landscape that linked our new home with our old home in the city. A combination of changing jobs, Network Rail’s interminable bus replacement services, and a general digging in to our new environment, has seen a shift made.

I wrote no poetry when I left London. I was touting a vaguely experimental novel, playing guitar and singing. Then, after a couple of years here, I started attending Poetry Wivenhoe‘s monthly evening of readings, at which a guest poet, local poet and open mic poets get up on stage for a couple of hours. After a few sessions, I started writing, and reading.

Last year, Scarecrow, a first collection of poetry, was published through me and Ella Johnston‘s own ‘small publishing concern’, Dunlin Press. I had some poems published in journals, too, and I read at poetry events across East Anglia, in London, and in Liverpool.

Wherever I thought I was when I arrived in Wivenhoe, I was not. Some of these thoughts made it into Scarecrow.

So where am I? I appear to have arrived amid a loose, but connected, sometimes neighbourly, sometimes geographically distanced, collective of supportive and curious minds – people who seek out, listen to, read, and most of all write poetry. Some of that poetry rhymes. Some of it doesn’t. Some of its meaning is straightforward and transparent. Some of it is oblique or opaque – a conundrum that doesn’t care whether it’s ever solved.

But what most of the poets I meet these days share, is the knowledge that what they do is outside of direct commercial concerns. It’s not usually seeking large audiences, or existing as some kind of a priori exercise in soliciting funding. That doesn’t mean it’s not good poetry. In fact I often feel the opposite. What it means is that it has other reasons for being. It is created because those who create it feel compelled to do so, compelled to describe – to interrogate, make ambiguous, reinterpret, reimagine – the world in which they live, perhaps for no other reason than they can.

Does poetry make you money? It’s a fair question. But why do you ask? It might help me if it did. But would it help you, too? There’s something about doing something that doesn’t offer financial return that really offends people.

In December, I headed back from Cumbria/The Lake District to Essex via Liverpool, to give a reading at the launch of issue two of Coast to Coast to Coast, a handstitched journal of poetry edited and produced by Maria Isakova Bennett and Michael Brown, in which I had a poem, Ways.

December is a busy time in the day-job for me, and I almost said no to going. In a week of travelling, Liverpool was an extra diversion. But there, at the Open Eye Gallery, were these people again. These poets, and an audience that had come to hear the poetry, reading and listening to the world being subtly reinvented, our understanding of the world being polished, muddied, sharpened, blunted. 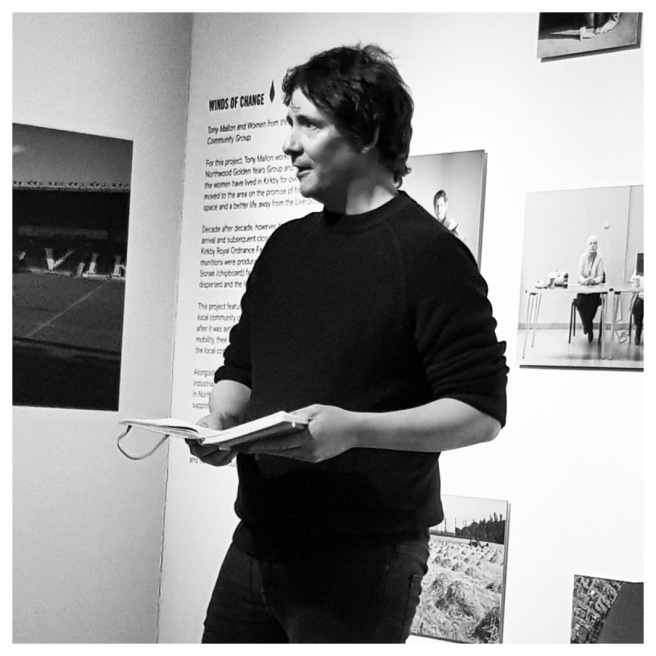 It’s strange now, thinking of that high tension line I had drawn between Essex and London six-and-a-bit years ago. So direct, so certain. And now what? Well, it’s January and I’m back in Wivenhoe again. And this is good. Except I am also not here. It’s like everything is starting to be everywhere. And this is good too. 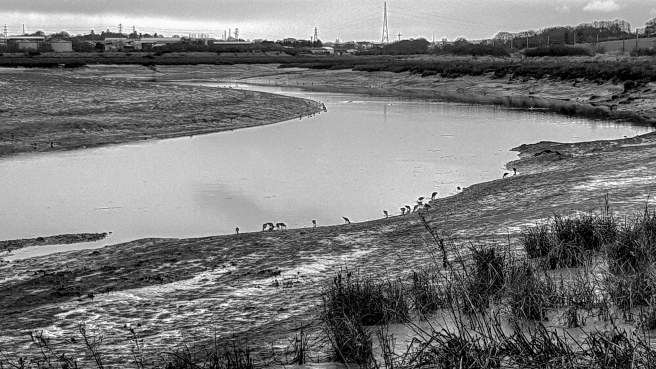 I’ve been rewarded this year by being introduced to the poetry of Billy Mills, whose recent The City Itself is one of those occasional collections that can make you question why you write the way you write. It simplifies the complex, and finds huge space for exploration in what is seemingly simple. It’s about place, and about the elemental and the supposedly insignificant, the particular and the universal, and the relations between them. It’s words, but it creates a soundscape – a rising and falling of the whispering air around us. It’s great, basically, and is part of a continuity of work Mills has been working on since the late 70s – a series of books that form one long book, or one long conversation/interrogation, at least.

Poet Michael Begnal notes here of The City Itself, its “compact and intricate soundplay, occasional lyric flashes, documentary historical material, and even personal narrative in order to make an argument about the interplay between urban and natural spaces and human beings’ place in the network of things.”

Nicely put, and one of the reasons why I’m delighted that Mills has reviewed my recent debut collection of poems, Scarecrow, on his Elliptical Movements blog, alongside work from Peter Philpott, Sonja Benskin Mesher, John Phillips, Daragh Breen, and Anna Cathenka.

You can read the reviews here. It’s a blog worth subscribing to.

I love a proper big art project – one that starts as isolated moments and then starts to coalesce, condense into some serious thinking, serious time and serious work. I’ve just completed one.
About four years ago I went to a Poetry Wivenhoe evening and was encouraged to go away and write something, and to read it during the next session. I hadn’t written any poetry since I was a teenager – just features for magazines, songs for bands and drafts of novels. Many people I knew put down poetry as twee or pretentious. I wasn’t sure why I wanted to engage with it again, but somehow I did.
Also, much modern poetry has become assimilated into the entertainment industry. Big contracts, tours, performance. Big soundbites, loose rhymes, dull platitudes etc. No ideas. The kind of stuff you hear on Radio 4. The old radical, intellectual and left-wing poets have been interred. Today’s avant-garde hardly gets a glance.
I set about writing Scarecrow as I headed to and from the day job of editor/journalist. It’s a mix of poems about London and here, Essex, and up north in Cumbria too (occasionally), and, mostly, about the spaces between them. And about time. Because everything is about time, really – and if it isn’t, it should be.
I don’t know if it’s radical, or even if its politics jump from the pages of the collection. I do know that it’s – finally – pretty much the book I wanted it to be: squared by modernity, folky round the edges, surreal in some detail. It tries not to falter. It tries not to disappear.
We’re launching (Dunlin Press is launching) Scarecrow at Wivenhoe Bookshop on Friday 17 March. I’ll read some of the poems and we can all have glass of wine – the Bookshop launches are always fun! Come along if you can.
But did I find out why I wanted to engage with poetry again? Well, yes.
Because sometimes we need more than journalism and internet opinion pieces. And sometimes we need more than the templated and bourgeois narrative structures of many novels. We need language to work harder; thought to work harder.
The world around us fractures and we need new ways of explaining it. Poetry can be a good start.
January 20, 2017 ~ MW Bewick

Something hidden in the woods.

In January the ferry marsh is spare. Nearby there are godwits, little egrets, cormorants and, present in their sorrowful call, redshanks.

It is dark at mid-afternoon, especially on the days when the sky starts charcoal and lightens to battleship grey – but no more.

At the writing desk the blinds are up and the silver birch is peeling; blue tits flit through it on their way to the woods. The train horns are reminder of the city; the concrete; the glass.

I have an old notebook with new writing – words, at least, nothing solid, though it is condensing, slowly. And I have a new diary pocked with ink-marks and scribbles. 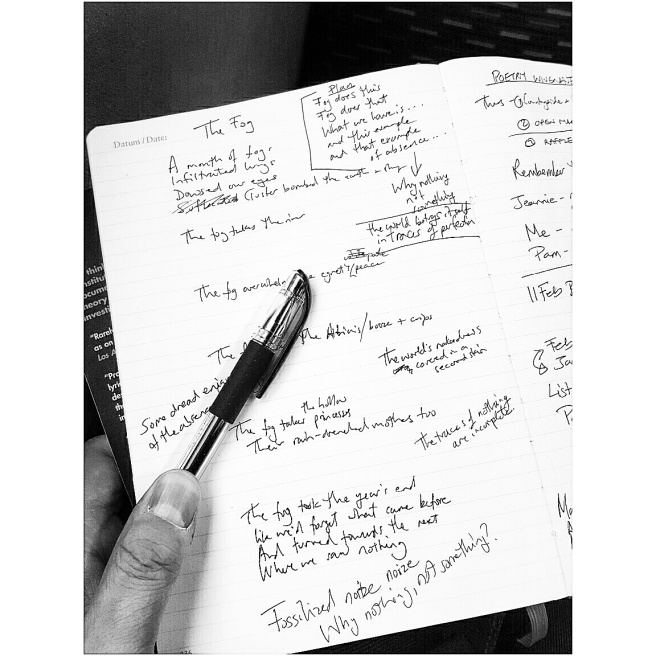 Before the noise of new writing, though, there is something else. Something coming. Something that has been here for a while. A book.

It was the week she discovered Bob Kaufman and read a poem of his (now forgotten) while the rain streaked across the window of her suburban flat. It was the week the cancer first looked ineluctably fatal.

The news streamed in dolefully: news of supporters and opponents, the disaffected and the quietly optimistic, as if they were some covert vigilante force, untrustworthy renegades all, double agents plenty.

The news was totemic, untouchable. The language was all wrong. The words she was hearing, the words that remained despite visits to the hospital – they were words beyond the window, beyond the rain.

To S___ on High Street it would be the time when the names were erased. She counted them up, window-shopping in the spring sun. The names that were now gone, in such a brief spell of time. Sam T and Granny F. Uncle, suddenly. The fit guy in the year above. And now they disappeared off the TV and magazines. Icons, faces she loved and cared about. Time had been luscious and now it was cheap. The summer ahead was loose change. Comes to nothing. And who to turn to? Who would go the distance with her, in her life?

as it landed deep on these shores, here –
striking home to avenge what we began before
striving vainly to settle foreign scores

What are we
If the oncoming silences
Sweep in early to
Mute us even now?
And what if the stories we float
Are jetsam for the tide?
What prospect is a journey
When we cannot believe it ourselves?
And where do we get
If all the yards of days
Are dismantled by dusk
To bridge the way back home?

[The sounding of the curlew curfew / (This, always the sign) / Finds the search for meaning ended / Now friends only nod in hasty greetings / Fleet and hassled, as lovers depart / Less longingly, more slingshot / Into the frozen yawning dawn / Of our numbed tomorrows.]